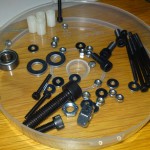 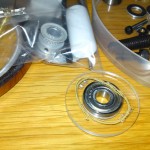 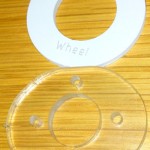 The only challenge here is figuring out witch motor should go to each board. I found a nice wise grip to crimp the cables with Quick and simple.
The only trick here is to measure the hight of the nuts (that moves the Z table) before putting it in. That was a loot easier (and quicker) than trying to guesstimate where they should be. The wiki says: *TIP* If the rods are too short they will move back and forth causing loss of resolution and additional noise. If this is the case for you, just insert something between the end cap and the rod to help compress it.
Well I put one of the M3 nuts in each of the two caps to press the rods into position.

The parts needed for this laid out This part was installing the drive rods and belt drive system for the Z-stage.

The parts for the Z-Stage assembly laid out Even though there are teeth on the idler wheels, the teeth of the drive belt should be facing outwards (from the wheel). Very simple stage to assemble. Probably took a lot less time than the wiki suggested.
Now it is simple to see what the completed cupcake will look like. Completed assembly (and plastics in the back)